Based in South West England, Griselda Sanderson is a musician and producer who plays traditional fiddle, violin, Norwegian hardanger fiddle, viola, piano and nyckelharpa – a Swedish bowed, keyed fiddle with sympathetic strings. One of six musical children of violin-maker Derick Sanderson she grew up in Clackmannanshire, Central Scotland, attending the Royal Scottish Academy of Music and Drama as a youth as well as playing in the National Youth String Orchestra of Scotland. She went on to study at Dartington College of Arts in Devon, attaining a 1st class BA Hons degree in Music Performance and Composition and a PhD in Musicology on the subject of traditional Scottish and Irish music and the internet. She has written several published articles on cross-cultural music collaborations. 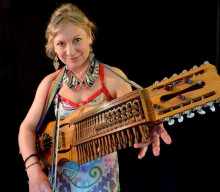 Griselda has a large repertoire of traditional Scottish, Irish and Swedish material and a special interest in Mediaeval, North and West African music. These interests have led to collaborations with notable musicians from the UK (hurdy-gurdy player Steve Tyler), Portugal (Nuno Silva, Ricardo de Noronha) The Gambia (Juldeh Camara), Senegal (Amadou Diagne) and Morocco (Simo Lagnawi & Soufian Saihi). Her current live project is the Meridianum Ensemble with musicians from the UK, Portugal & Morocco.

Having studied both classical and traditional music she has performed in, written and recorded for a wide range of contexts from string quartets and orchestras to acting parts as a musician in theatre, TV & film:

Recorded music for Evermore Theme Park in the US (2018)

On stage music at Shakespeare’s Globe, London in As You Like It dir. Blanche McIntyre (2015)

On stage music for The Royal Shakespeare Company’s The Winters Tale dir.  Lucy Bailey with music by Jon Boden (2013)

On stage music for The Devil’s Purse, Angelheart Theatre(2011)

Griselda’s interest in site-specific composition has led to work in some more unusual venues:

Music with Oceanallover’s On Tenterhooks by Exeter Canal in 2016

2020- Griselda is currently working on a solo recording and research project on the subject of Europe.

2017- May: ‘Veer’ was released, an album of original music composed in collaboration with Portuguese experimental wind player (ethnic flutes including the Slovakian fujara) and percussionist Ricardo de Noronha.

Griselda first began producing with her band Waulk Elektrik, with whom she set up the label  Waulk Records. The label now specialises in projects related to the traditional music of the British Isles and Northern Europe and West and North Africa.

Griselda has taught traditional fiddle and nyckelharpa for many years. A  keen advocate of the benefits of community music Griselda has promoted and encouraged the continuation of traditional music in her locality by running sessions, teaching traditional music at a Saturday morning music school for children and running a weekly fiddle group. Currently she also runs Tunelink alongside her son Louis Bingham, a group for all ages learning by ear,  connecting traditional music with dance.

She taught music performance to undergraduates at Dartington College of Arts for ten years and has been an associate lecturer in music at Plymouth University. In 2009 she co-wrote a Popular Music degree course for University College, Falmouth, which was implemented in 2010.